Since giving up Repartee, I have had more time to go to events other than my own and one I had long fancied going to was the TransLiving Weekend at Eastbourne. It was quite a distance for me, a four and half hour drive, but I was very glad I made the effort as I thoroughly enjoyed the weekend. 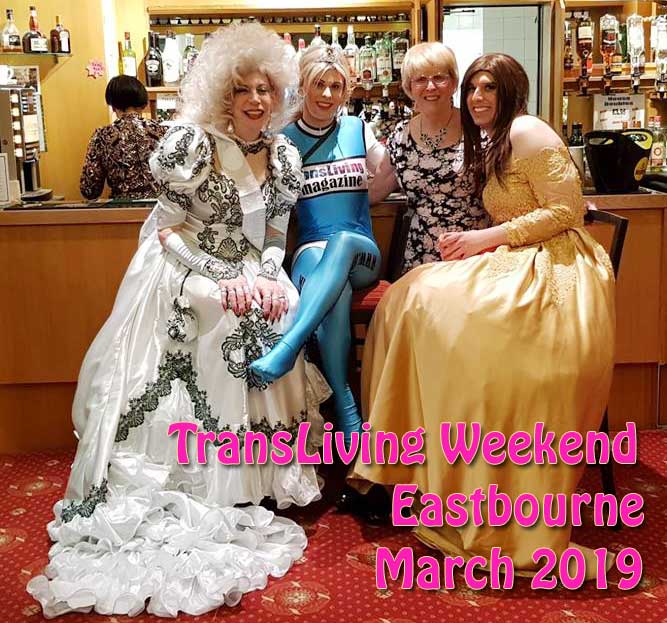 I arrived at the Haddon Hall Hotel in Eastbourne just before 2pm on the Friday 15th March and after getting installed in my room, I soon met up with a few old friends but over the weekend I made many new ones.

There was a fetish theme for the first evening so after dinner I changed into my leopard print outfit that had always attracted a lot of attention whenever I had worn it before. The outfit grew out a pair of thigh boots that had been made-to-measure especially for me by Steve Pateman of the original ‘Kinky Boots’ factory in Northamptonshire. I asked for an additional length of the leopard print fabric that the boots were made of and used it to make wrap-over top and sleeves which I designed myself. A big hair wig from Hollywood topped the outfit. Several people were surprised I did not win the parade but really when Nina Jay appeared in her slinky body suit with arms strapped behind and bridle gag, there was no doubt she would win.

I had never been to Eastbourne before but it was still far too windy to venture out on Saturday (my wig had blown off when I was unloading my car on Friday). So I stayed in the hotel all day, browsed the trade stands, and did a little promoting of our Dumbleton Days event. Mid-afternoon I retired to my room for a rest as I hadn’t slept a wink the night before because of the noise of the wind and those who were up all night in the bar immediately below my room ( I heard Happy Birthday being sung at around 5am and later learned it was Shane’s birthday!).

But I did not rest for long as I needed a long time to get ready with the outfit I was to wear that night for the Miss Transliving International contest. This was one of my favourite outfits; a fabulous ball-gown I got from a German retailer on eBay some years ago. I had modified the top part to show off a bit (well a fair bit actually) of my cleavage. Another big hair Hollywood wig on top had become a bit windswept-looking over the years but it was still pretty spectacular. My make-up took quite a time to complete which I finished with bright red sparkle lips.

My dress had a long train which I kept hitched up below the skirt during dinner but I let it down just before the Miss TLI contest. There were three categories; Golden, Diamond and Miss TLI overall. I wasn’t quite sure how this worked and just assumed I would be considered for the Diamond category (which was for the age range I was in). So I was quite surprised to be crowned the overall winner, apparently the oldest person to win the title! Yes, it felt good to still be able to beat everyone including those half my age (79)! The title came with a couple of goody bags full of prizes which included a free photo shoot with Safety Pin-Ups who were providing a photo service at the weekend. My favourite from the set I had taken is below. I'm hoping they will be coming to provide a photo service for our Dumbleton Days event.

The highlight of Sunday was a St Trinians Girls photo-shoot organised by Nina Jay. It was a bright sunny day and not quite as windy as the previous days (but still quite breezy!) so about a dozen of us, dressed as naughty schoolgirls (like no real schoolgirls I’ve ever seen!), ventured out of the hotel to the sea front. It was all good fun and provided much amusement and curiosity from passers-by as we posed for many photos by Sophie Tagg.

Then it was a quick change into more normal everyday wear for some of us to go for a cream tea at the Victorian Tea Room on the pier. This was very pleasant and well worth doing if only to see the fabulous chandeliers which were for too big for such a low-roofed building.

Sunday evening was a ‘Create Your Own Outfit’ theme night. I think most who entered the contest had a pretty wide interpretation of what the theme actually meant, but I took it very literally as I did actually design and make my outfit myself. It was a red, puff-skirted dress which first appeared on the special cover of Repartee 50. Of course having won the Miss TLI title the night before I was hardly likely to win again but nevertheless did join in the parade. Following this there were several spot prizes during the excellent disco which had been provided by Katie each night into the early hours.

So it was with sadness we bade our farewells on the Monday morning. It had been a most wonderful weekend and I will have no hesitation in going again. Actually several people pointed out I really will have to come again next year to hand over my crown to the next Miss TransLiving in 2020, something I will be very happy to do.

I would like to thank Stacy, Shane, Nina and others who were involved in organising the event and would thoroughly recommend anyone else who has not been before to give it a go. It is a twice yearly event each March and October. Details at www.transliving.org.uk.

But don’t forget our Dumbleton Days event in November which will be even more fabulous – well I have to say that, don’t I?