This website was created in early 2018 as the personal website for me, Martine Rose. This was prompted by my decision to close the former Repartee website (with the repartee.tv domain) which had become an online magazine serving the transgender and cross-dressing community (see below). The reason to close that site was that in my late 70s, I had just become tired of the responsibility of maintaining that website single-handed. I had other interests in my life and after so many years serving the transgender community for so little reward, I decided to finally retire.

However I wish to continue with the events that I organise (Dumbleton Days and Rose's@WGW) and as I am no longer able to promote them on the former website, I created this site in order to continue doing so. This site will be much more manageable as there will not be the constant pressure to add new content (articles, etc.) and oversee the 'Members Area' (comprising a Social section, Forum, Blogs and Chat) of the old site. Now I can just add my own photos and add the occasional personal blog when I feel like it, without the pressure of having to constantly chase others to contribute something.

So this is to unashamedly be a personal website about me. I may write about and include photos of others (particularly of those I meet at events) and I might even add occasional stories and photos from others if they send me anything, but mostly it will be about me!!

A BRIEF HISTORY OF ROSE'S AND REPARTEE

I founded Rose's House in Sheffield, UK in 1979 as a place to provide comprehensive help and support facilities for the transgender community. This was in the days long before 'dressing services' became almost commonplace. The regular parties during the 1980's became extremely popular attracting guests from all over the country as so little else was available in those days.

1989 - The founding of Repartee Magazine

Rose's House was such a great success that I launched Repartee Magazine as a printed publication in 1989. Because of its original lively approach to transvestism, Repartee grew rapidly from an initial 100 copies with photocopied pages into what soon became regarded as the leading magazine for transvestites in the UK, if not the world. It had a growing international readership and was consistently voted “Best Lifestyle magazine from UK” by The Tranny Guide.

As a printed magazine, Repartee had a great stylish design and was renowned for its excellent standard of production and varied content. Each issue was packed with useful information and support, lots of fabulous photos, readers’ letters, features, stories, event reviews and helpful fashion, make-up and dressing advice. Since 2000 it has been in full colour throughout. For many years I had produced the magazine virtually single-handed, but after some years helping me with Rose's, Bella Jay took over as editor of Repartee.

Repartee was years ahead of any rival publications that have since copied Repartee's success. Repartee magazine has been described as “the best, most relevant magazine for the transgendered community” by Mary the Chair of the Manchester Concord Group. 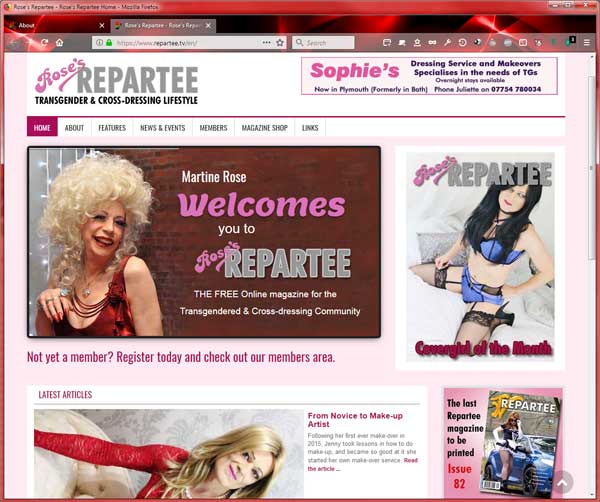 In mid-2016 we dropped the printed magazine but with a new enhanced Rose’s Repartee site the magazine became online only but in a form more suited for the internet age. It was all completely FREE and included a members area with a Facebook-like Social section, a Forum, Blogs and Chat. The www.repartee.tv site closed in June 2018 and was replaced by this site.

Why is this site still called Rose's Repartee?

The previous website for the online magazine was also called Rose's Repartee but that had the Repartee.tv URL whereas this is Roses-Repartee.uk. I called the original house in Sheffield Rose's House for obvious reasons and Repartee seemed like a good name to call the printed magazine when we launched it way back in 1989. When we started the very first Repartee website, we thought the .tv bit of the domain name was a cool idea (that was before the terms transvestite and tv became less acceptable within some sections of our community!). I've now dropped the .tv mainly because it is a relatively expensive TLD (top level domain) whereas .uk is only a fraction of the annual cost. With having a new url, I thought keeping 'Repartee' would make it a bit easier for former users of the old site to find this new one. However 'Repartee' no longer is the title of a magazine but is being used with the actual meaning of the word: this site is my repartee, Rose's Repartee.