Another Steampunk event! This was the third one I attended in two months. There was Kelham Hall in May, Papplewick Pumping Station only two weeks previously (see photos on here), but I could have been to several other events too. Just about every weekend recently, there has been a steampunk event not too far away from me. And there are several more to come in the next few months! 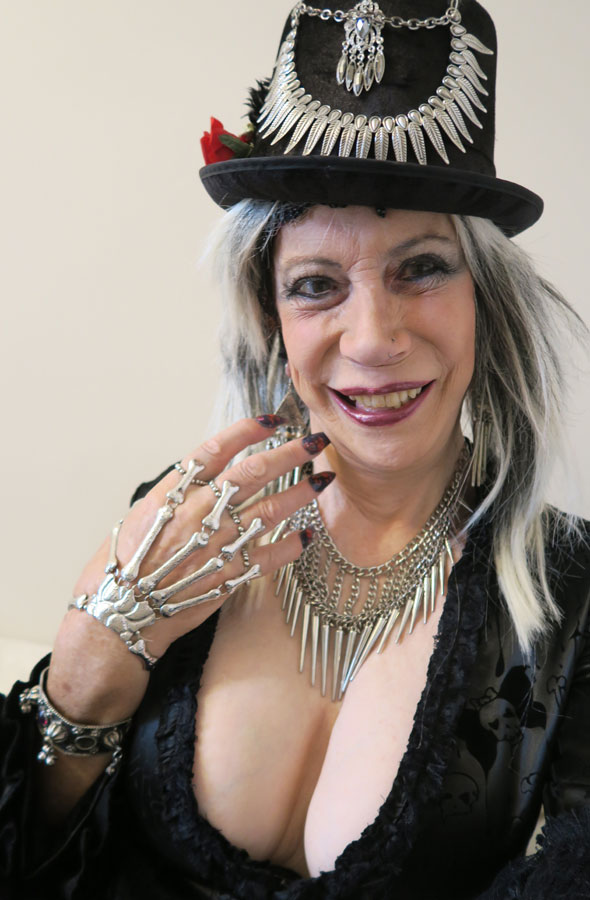 Why are there so many steampunk events? And what is steampunk anyway? I keep getting asked that question. Steampunk seems to be really superseding Goth and it easy to see why. Steampunk has evolved from the goth scene and is basically goth plus - plus much more! Steampunk is evocative of the steam era: Victoriana overlaid with fantastical gadgetry inspired by the steam powered age and the stories of Jules Verne (the giant octopus from ‘20,000 Leagues Under the Sea’ is a common icon in the steampunk world). You can go to a steampunk event just wearing a Victorian costume but really, anything goes, the more amazing and extraordinary the outfits the better. Some of the costumes and accessories display incredible creativity, many embellished with copper tubing and brass fittings, clocks, watches and gear wheels, hats with goggles, and all manner of ingenious devices. If you love dressing up, you will love steampunk. 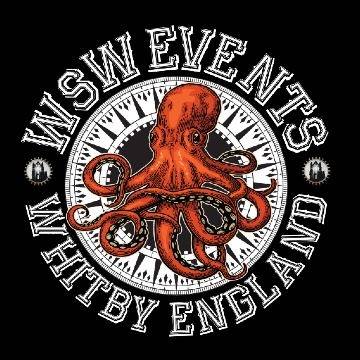 I only decided to go to the Whitby Steampunk Weekend (WSW) on the spur of the moment, the Sunday before. I had no one to go with but I didn’t mind that as, having been to a number of similar events recently, I have got to know many of the regulars and I knew I would have a great time. I booked a single room in a small guest house within walking distance of the centre and this turned out to be a most excellent choice as the couple who run the place were extremely pleasant and exceptionally helpful. There were three other couples staying there who had also come for the steampunk weekend. I arrived rather later than expected mid-Friday afternoon as what should have been a 2½ hour journey took 4 hours owing to a stop-start traffic jam for several miles and the heaviest traffic I’d ever seen going to Whitby!

I changed into a long skirt and a modest blouse, as I didn’t want to wear anything too daring that first evening, which was just as well as wandered around town, I was a bit disappointed not to see many steampunks around. I had a meal at the Duke of York and then moved on to The Little Angel pub which was a favourite haunt for goths and steampunks though I did not notice any until later in the evening. I usually hate going into a pub alone as I’m very shy about making contact with others. I sat alone with my drink for quite some time, hoping I might be able to get into chat with the two ladies at the next table but with my difficulty in making small talk, I failed to engage when one of them on two occasions presented me with possible entrees. It was only shortly before they were about to leave that I did briefly eventually get to chat with them. They were for the steampunk weekend too but not ‘dressed’ that evening.

It was a disappointing start to my weekend, but the Saturday was quite different! By the time I’d got myself ready to go out it was late morning before I headed to the Spa Pavilion where I knew many steampunks would be gathering. I soon met up with a couple of old friends and some of my more recent steampunk acquaintances. I spent some time wandering around the trade stands that occupied two floors of the Pavilion and was just thinking of heading into town when I met a lady wearing a mermaid costume. She told me she made it herself and was on her own that day. When I said I was too, I was delighted when she suggested we go around together. Her name was Linda and she was staying with her husband in Scarborough but apparently, as he doesn’t like all the dressing up, she had come to Whitby alone for the day. Oh, why is it that every time I meet a lovely lady with whom I seem to get on very well, they turn out to be married!? But I really enjoyed her company that day. I was very impressed with her creativity with her costume making; a woman after my own heart. Her fishtail skirt did hobble her somewhat but it did not seem to impede her very much at all.

She hadn’t seen the traders but I was happy to wander around the traders halls again with her, and then again after a tea in the café. Mid afternoon, we watched the ‘Tea Duelling’ contest in one of the halls. Tea duelling seems to be a thing at steampunk events: two contestants sit at a table each with a cup of tea, they each take a biscuit and dunk it simultaneously into the tea for a count of ten by the judge and the winner is the one whose biscuit is still in one piece when it is held up. Silly, but all good fun! 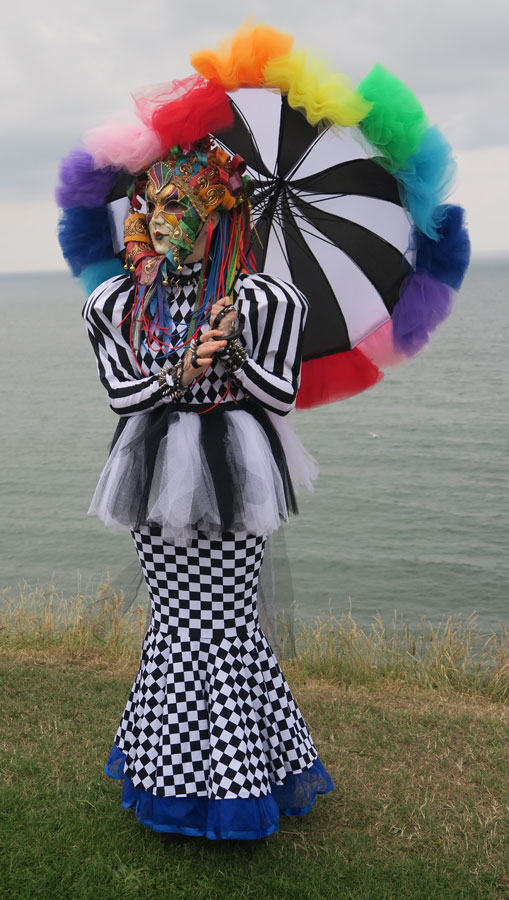 It was time for the parade late afternoon so we headed to the cliff top where everyone was assembling. I met Jen Arnold whom I had got know at recent steampunk events. Jen was wearing yet another amazing costume that attracted the attention of many photographers, so I did not get much chance to chat with her.

My feet were killing me by this time so after the parade, Linda and I headed into town to The Little Angel for a drink before Linda had to get a taxi back to Scarborough. This time the pub was much more packed with steampunks but we found a seat at the back and soon got chatting to a group at the next table. All too soon, Linda had to leave for her taxi but I was able to continue chatting with the people around me. Amazingly a guy to my right used to live near to where I am and knew the pub and its previous owner, which I bought in 2012 (my present home is now the rear part of the pub)! He and the other people around me moved on after awhile but it wasn’t long before others took their place. A lady, I think her name was Maria, sat in the corner spoke to me but as there was a gap between us, I couldn’t hear what she said so moved closer. But even then, I struggled to engage in chat as although my hearing is normally fine, I do find it quite difficult to hear what people are saying in a noisy environment like a pub. It can become quite tiresome to keep asking a person to repeat what they have said to me so, if it is not a direct question, often I just smile and hope that my response is appropriate. Maria, if you are reading this, and anyone else who has been in a similar situation with me, sorry if I have appeared uncommunicative.

I’d had a number of gin and lemonades and my feet weren’t hurting so much by this time so I thought I’d call it a day and stagger back to my quest house. When I got there, I was pleased to accept an invitation to join the other steampunk residents and the house owners who were enjoying drinks and chat around a table in the front garden. It was a perfect end to a wonderful day.

I had intended to stay for the Sunday too but next morning I was feeling exceptionally tired despite a very good night’s sleep. Over the really excellent breakfast I just didn’t feel like I could face getting all dressed up and made-up again (a process that can take me at least 2 hours), so I told my hosts that sadly I would leave when I had packed up. But I wasn’t even half way home before I deeply regretted that decision. I should have just rested awhile in my bedroom and got changed later when I was feeling more alive. Feeling very tired in the morning is actually normal for me these days: probably my age! But it was too late. I couldn’t go back. When I saw later the Facebook posts from everyone else enjoying the Sunday, I felt very angry with myself for missing out on what I am sure would have been another great day.

Ah well, there is Hebden Bridge next Saturday (though I'm not sure if I’ll make that as it's my garden party the Saturday after, 7th August), Newark Steampunk August bank holiday, and Crich in September. Yes steampunk is everywhere!