Cruising on the Queen Victoria

I took my first ever cruise aboard the Queen Victoria in early January; just a short 2-nighter from Southampton to Hamburg. The Queen Victoria is reckoned to be a good choice for a first-timer and I thought this cruise would be a good taster to see how I would take to cruising life. Well I loved it and I think I have become hooked! 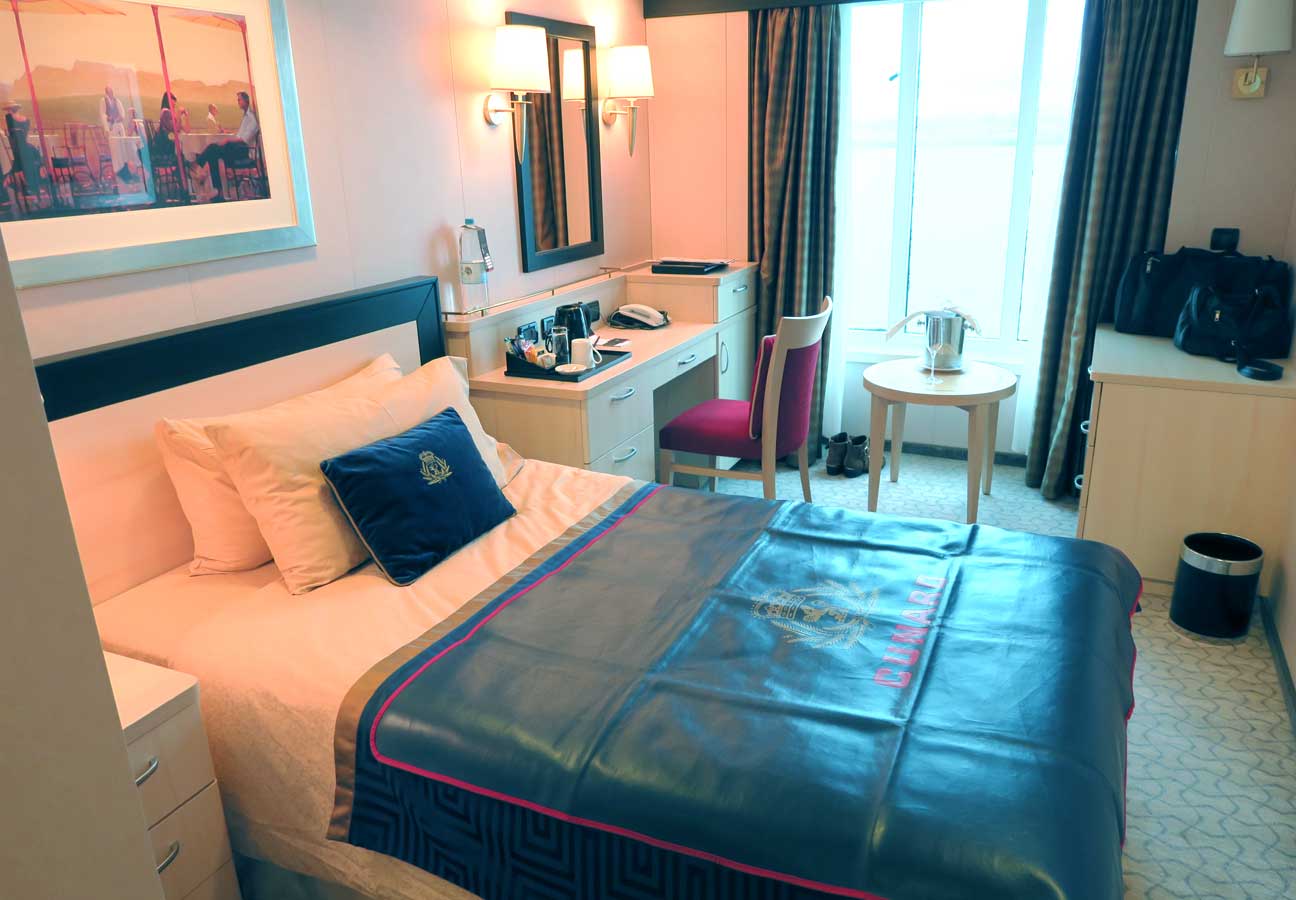 The embarkation process was lengthy but an experience that I’ll find useful for future cruises. I eventually got on board at about 1pm and was able to go straight my cabin. I had managed to get one of the only nine single cabins (out of over 1000!) which were very conveniently located on the same deck as many of the main features on board. It had a sea view and I was most impressed with the standard. There was even a free half bottle of bubbly waiting for me in the cabin. But having dropped of my bag and coat, I went straight to the Golden Lion Pub which was just across the deck from my cabin for a delicious fish and chips lunch. All food is included on board (apart from in the speciality restaurants) but drinks are extra and not cheap. I didn’t get any drinks during my time on board so had no extra to pay apart from the $12 per day basic gratuity that is automatically added to my bill.

Then I made a brief exploration of the lower deck before back to my cabin to unpack and a leisurely change for dinner. But before dinner, after the compulsory 4pm Emergency Drill, I went up to the top deck for a ‘Sail-away’ party. I didn’t see much of the ship sailing away though as it was dark by this time and the party was packed. Just after this there was supposed to be an LGBT gathering but could see no evidence of that as the venue where it was scheduled to take place was also packed with ‘ordinary’ guests. 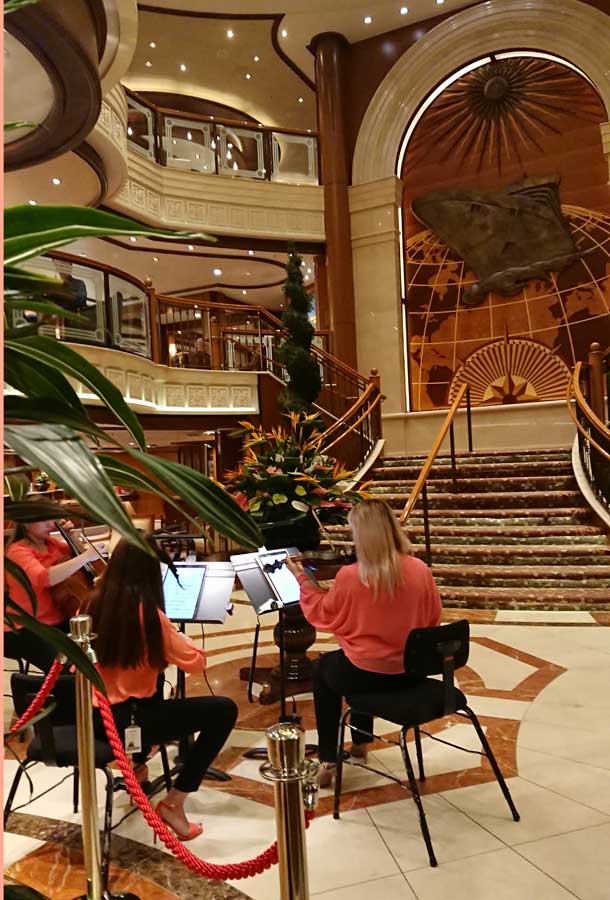 I had selected the first sitting (6pm) for dinner on an 8-seater table as I thought by choosing a larger table I would have a better chance of meeting someone amiable, preferably a single female. After all, that was one of the main reasons why I was attracted to the idea of a cruise! And so it was to be! All passengers (of my class anyway) were allocated a table for the duration and I was lucky as there were four other ladies on my table and I became particularly very friendly with the lady called Karen who had been seated next to me.

It was an excellent 3-course dinner after which I went to the theatre for the nightly show. This night it was a Beatles tribute band which though good, I cannot say was top-rated entertainment. However yet again I found myself sat next to a lady from Vancouver who engaged me with very friendly conversation.

It had been a long day for me so after the show, though still relatively early, I retired to my cabin. I could only manage fitful sleep though (not unusual for me in a strange bed) and in the early hours I caught such a lovely sight of a near full moon shining on the water through my cabin window that I took a photo (see photos below).

Next day I could have taken breakfast in any of the several restaurants on board but returned to where I had dinner the night before, meeting another friendly couple. Then yet more meets when I attended a Solo Travellers’ Coffee Morning. More exploration of the ship followed up until time for lunch. I was not so lucky with dining companions this time but I was seated right by a large window at the stern of the ship with the sun shining warmly on my back. We were somewhere in the middle of the North Sea at this time.

So far I had not been outside on deck so I got my cardigan to venture out but only briefly as the sun had gone by this time and I was not really dressed for the chilly weather. The sun deck and pools (there’s two) were deserted apart from two couples languishing in two of the hot tubs. 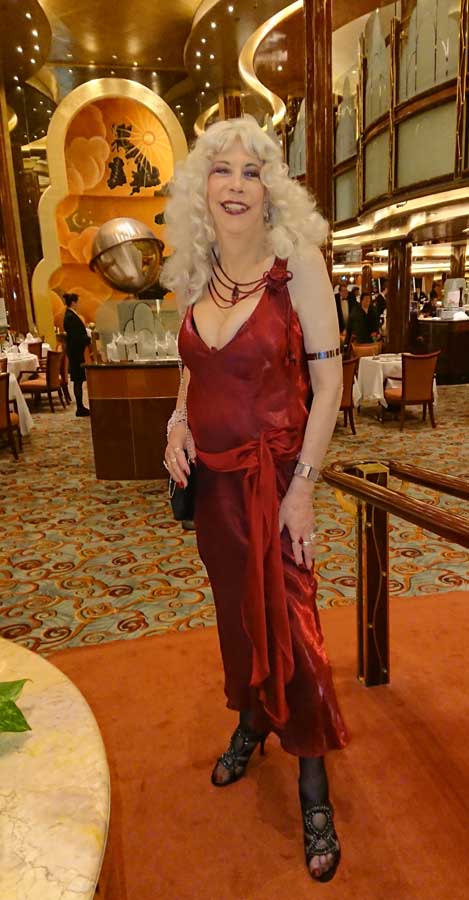 Then yet more food, cakes this time, for Afternoon Tea in the glorious Queens Room. There was a very long queue for this at first but I went towards the end of session when I just had a short wait to be seated. Though I was seated by myself at a small table, once again a lovely lady at the next table started chatting with me.

After tea I had not much time to change for the Gala Dinner for which everyone was expected to really ‘dress up’. Over another excellent dinner I was pleased to meet up again with Karen. Following dinner we went together to the theatre for a dance show (goodish) and then to the pub where we enjoyed a sort of musical bingo game along with a group of other ladies. Finally I needed to pack my bag as much as possible before going to bed as we had to vacate our cabins by 8 o’clock the next morning!

I did leave my cabin on time along with my baggage and met Karen who just so happened to be in the next cabin to me. Our scheduled time for disembarkation was 9.30am so we had plenty of time to have a final big breakfast on board to last me through the day. All too soon it was time to disembark. Karen and I shared a taxi into Hamburg town centre where we had to part: she had to go her way and I took a local train to the airport and a very lengthy wait for my flight back to UK.

It was sad to leave the ship. Two nights was two short and I wished I’d booked a longer cruise. But it had been a great experience to see how I would take to cruising. Like Marmite, cruising is something you either love or hate. I did wonder if I’d become bored with more days at sea but so much was planned for each day. Also being shy and poor in social situations, I had been concerned whether I would actually get to have any sort of social interactions. But I found I needn’t have been worried on that score as throughout the cruise I found no end a people, mostly ladies, engaging in conversation with me. OK I did not find the love of my life; that would have been too much to expect in just two days!

I’m now even more looking forward to my next cruise. Actually before this cruise I had already booked another cruise to Asia which I’ll be doing very soon …